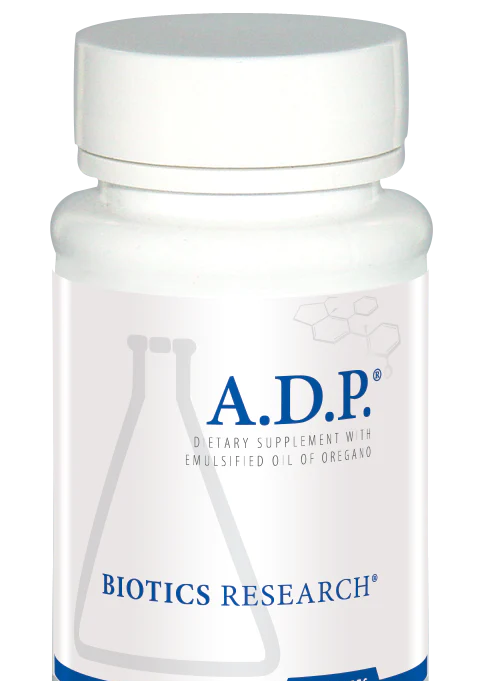 A.D.P.® is a proven effective, patented formula. Utilizing micro-emulsification and delayed release technologies, A.D.P.® delivers standardized oil of oregano throughout the digestive tract, where it functions to impact undesirable intestinal organisms*.
One (1) tablet with meals and at bedtime as a dietary supplement or as otherwise directed by a healthcare professional. Caution: Not recommended for pregnant or lactating women. KEEP OUT OF REACH OF CHILDREN.

One (1) tablet with meals and at bedtime as a dietary supplement or as otherwise directed by a healthcare professional. Caution: Not recommended for pregnant or lactating women. KEEP OUT OF REACH OF CHILDREN.

Proven effective against yeast and parasites, oil of
oregano is a powerful plant extract with a strong history
in supporting gastrointestinal health.
Biotics Research is widely known for micro-emulsifying
fat-soluble nutrients and other lipids for increased
nutrient absorption and bioavailability. This technology
has been used for oil of oregano, dramatically increasing
the effective surface area of the oil. In addition, a
sustained release mechanism has been applied to
A.D.P.®, assuring a gradual release throughout the
digestive tract. This combined effect of emulsification
and sustained release optimizes intestinal exposure to
the essential oil.
Long before the advent of refrigeration, the effect of
herbs and culinary spices on foodborne organisms was
recognized. Similar to rosemary, garlic, ginger, turmeric
and other household herbs and spices, oregano has
innate properties that could slow food spoilage; natural
antimicrobial principles at work. Today, scientists can
better explain these specific mechanisms of action.
The principal phenolic compounds in oregano –
carvacrol [2-methyl-5-(1-methylethyl)phenol] and
thymol (2-isopropyl-5methylphenol) function
synergistically with other biologically active
monoterpenes of oregano as antagonistic to certain
microbes. Both carvacrol and thymol have been shown
to be biocidal against Gram-positive and Gram-negative
bacteria in the jejunum, ileum and colon.1,2,3,4 Other
studies showed oil of oregano negatively impacting the
growth of biofilms produced by pathogenic bacteria.

This powerful plant extract also has robust antioxidant
properties. The synergist between carvacrol, thymol
and the other terpenes in oregano oil create a high
free radical scavenging capacity, supporting cellular
membranes, lipids and intracellular components
from oxidative stress. Not only does oil of oregano
demonstrate potent antioxidant activity, it also
supports healthy inflammation pathways by reducing
the production of tumor necrosis factor-alpha (TNF-a),
interleukin-1B(IL-1B) and IL-6 in LPS-activated THP-1
human macrophage cells. Mice models have shown
a reduction in interleukins, prostaglandins and
cyclooxygenase-2 (COX-2).13
A.D.P.® not only provides the effective phenolic
constituents found in oil of oregano, but these
compounds are micro-emulsified and delivered with
sustained release technology, earning the status and
recognition of a patented formula (#5,955,086).