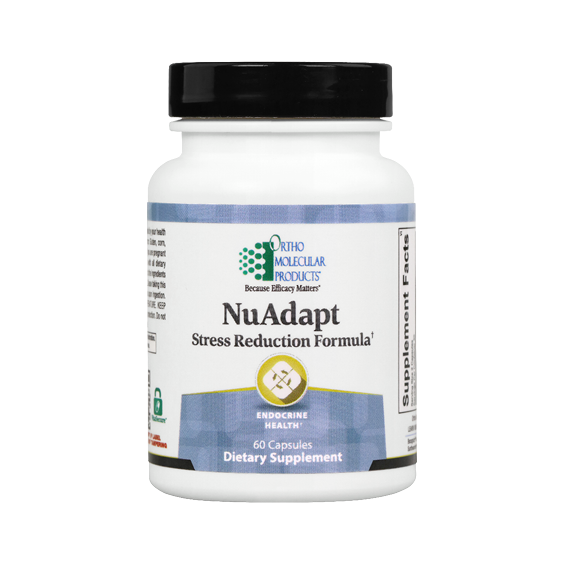 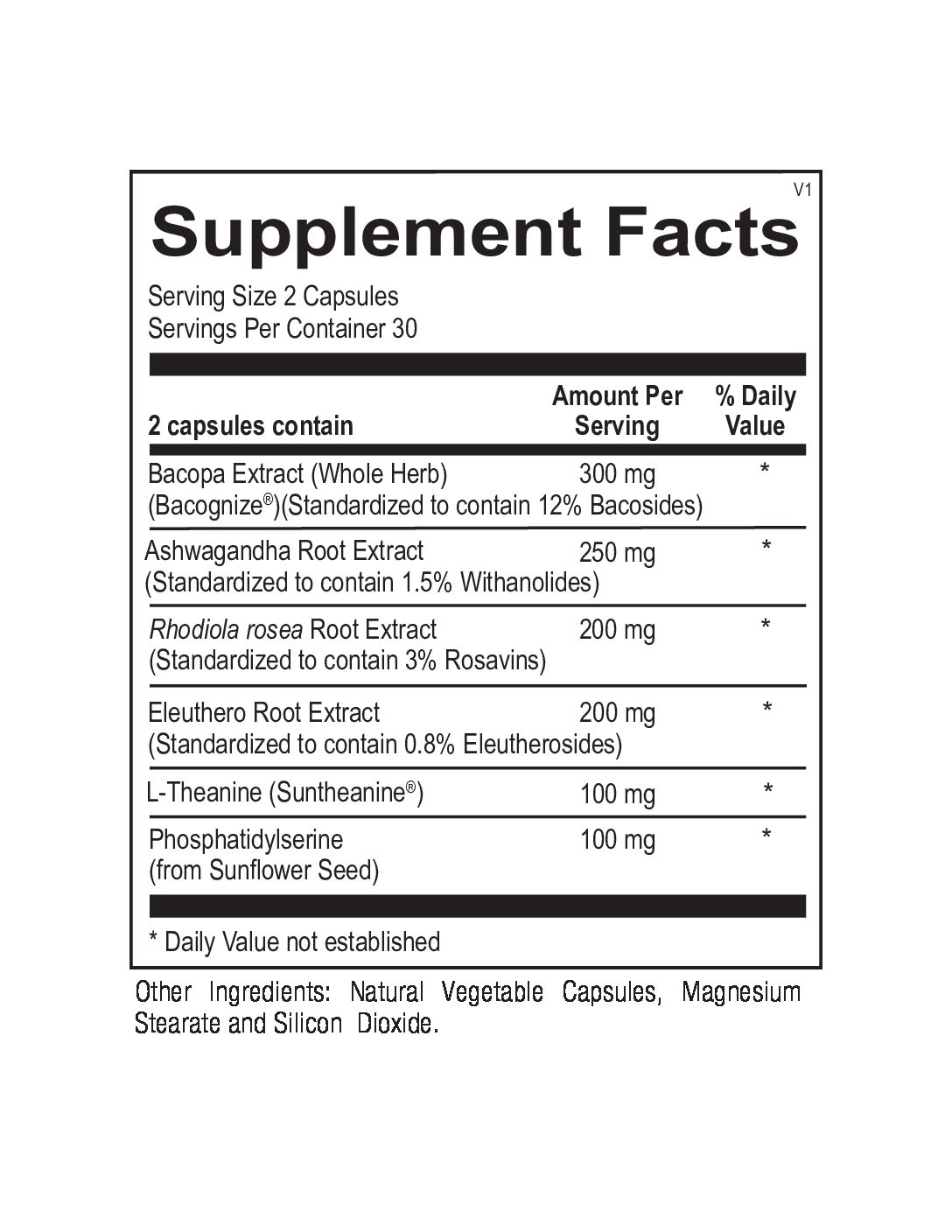 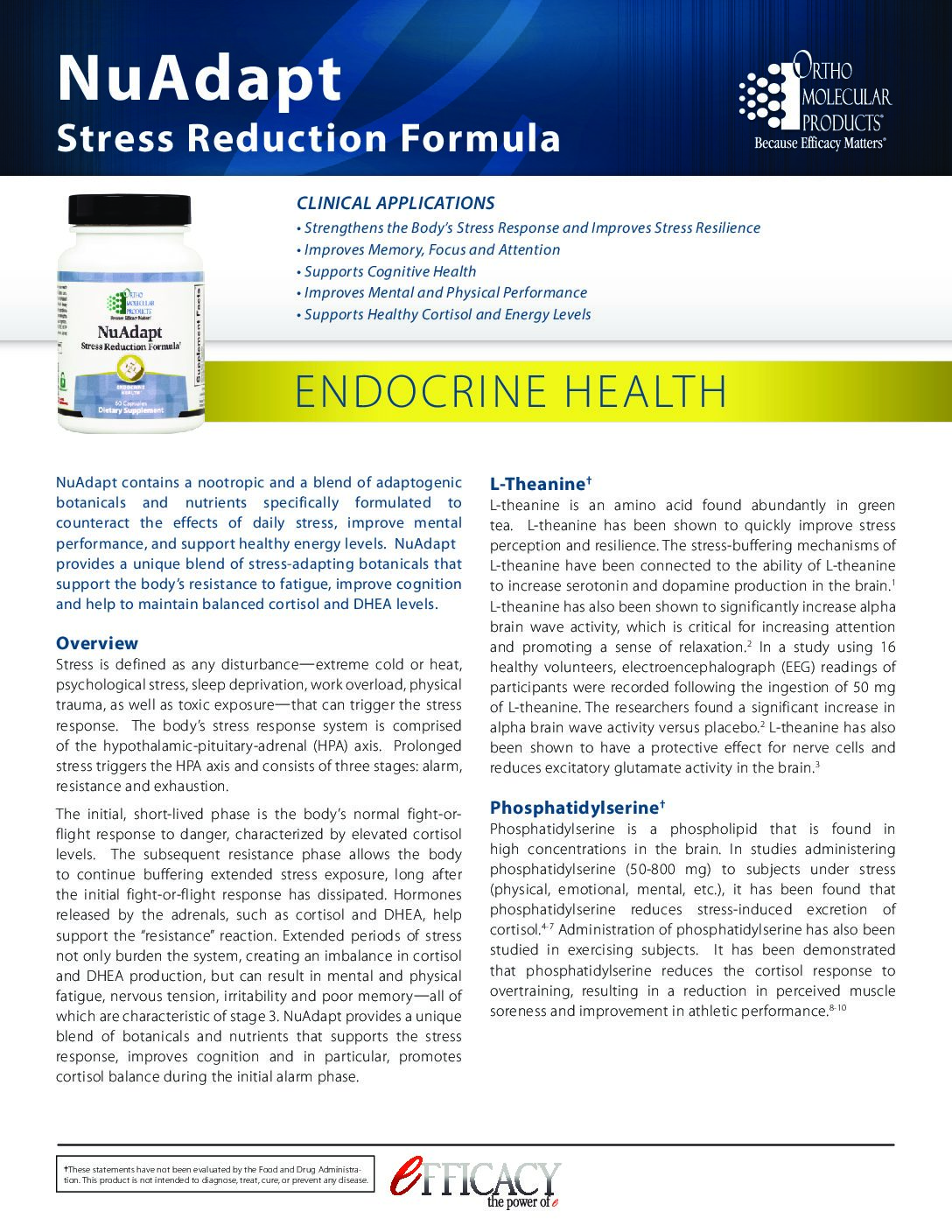 The initial, short-lived phase is the body’s normal fight-or-flight response to danger, characterized by elevated cortisol levels. The subsequent resistance phase allows the body to continue buffering extended stress exposure, long after the initial fight-or-flight response has dissipated. Hormones released by the adrenals, such as cortisol and DHEA, help support the “resistance” reaction. Extended periods of stress not only burden the system, creating an imbalance in cortisol and DHEA production, but can result in mental and physical fatigue, nervous tension, irritability and poor memory—all of which are characteristic of stage 3. NuAdapt provides a unique blend of botanicals and nutrients that supports the stress response, improves cognition and in particular, promotes cortisol balance during the initial alarm phase.

Bacopa monierri is an herb that provides nervous system support for individuals under stress. Bacognize® is known to improve memory, learning, attention, and focus. It is shown to have strong regulation of mood function at the serotonin receptor. Bacopa offers neuroprotection and antioxidant effects to reduce oxidative stress.

Ashwagandha’s strong adaptogenic properties provide an array of benefits for individuals that have compromised health due to extreme stress exposure. Ashwagandha’s benefits include improving stress resilience, supporting immune response, regulating the sleep cycle, supporting healthy thyroid function and protecting against exhaustion of the nervous system. Ashwagandha has also been shown to be beneficial in supporting proper mood regulation and restoring a sense of calmness under stress.

Rhodiola rosea has been categorized as an adaptogenic botanical due to its ability to increase resistance to a variety of stressors. Rhodiola has been studied extensively and is widely used in Eastern Europe and Asia to help support the nervous system, mood regulation, mental clarity, work performance and the sleep cycle. Within the central nervous system, Rhodiola has demonstrated an ability to preserve levels of neurotransmitters such as serotonin, dopamine and norepinephrine. Rhodiola has been examined for its significant reduction of fatigue under stress. It has also shown significant improvements in mental performance, greater mood stability, and improved sleep patterns.

Eleutherococcus senticosus has also been identified as a strong adaptogenic botanical and is widely used in China to improve general health, support memory and endurance. In addition to its ability to improve stress resilience and fight fatigue, Eleuthero has exhibited immune supporting effects. Eleuthero has demonstrated a reduction of heart rate in response to a stressor and improvement of performance in runners (race time).

2 capsules taken one or two times per day, or as recommended by your healthcare professional.