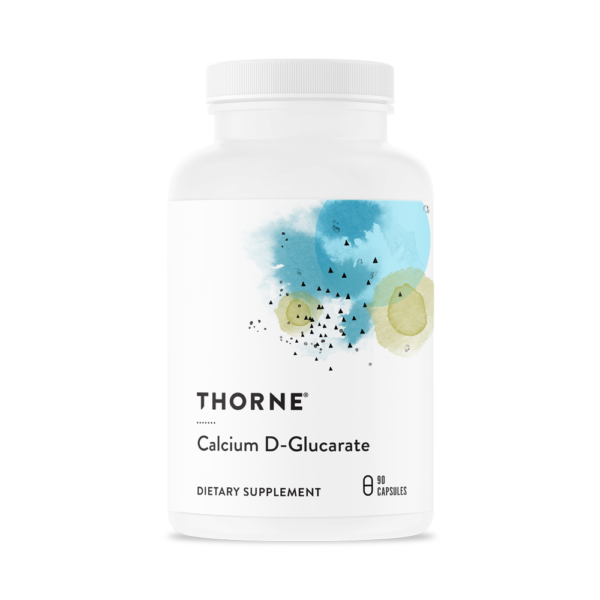 Enhances liver detoxification and supports the metabolism of hormones and xenobiotics

Calcium D-Glucarate (CDG) has been shown to promote liver detoxification by enhancing the metabolism of hormones and environmental toxins.

Take 1 capsule three times daily or as recommended by your health professional.

Calcium D-Glucarate (CDG) is produced naturally in small amounts by humans. CDG supplementation has been shown to prevent the recycling of hormones and undesirable environmental toxins, thereby promoting liver detoxification and the excretion of these potentially detrimental substances.* Other applications of CDG supplementation include the maintenance of already normal cholesterol levels and facilitating healthy hormone metabolism.*

How does it work?
Glucuronidation is the liver’s normal process of attaching a glucuronic acid molecule to potentially harmful substances to detoxify and eliminate them from the body.* During phase II liver detoxification, certain hormones and various fat-soluble toxins will undergo glucuronidation and be excreted through the bile or urine. Calcium D-Glucarate helps this elimination process to occur uninterrupted.*

Calcium D-Glucarate’s detoxifying and chemopreventive properties are attributable to its ability to increase glucuronidation, and the accompanying excretion of harmful compounds.* It does so by inhibiting the enzyme beta-glucuronidase.* During Phase II detoxification, hormones and various undesirable lipid-soluble toxins are bound to glucuronic acid in the liver (glucuronidation) and excreted through the biliary tract; however, beta-glucuronidase can unbind these toxins, which makes it possible for them to be reabsorbed rather than excreted. D-glucaro-1,4-lactone is the metabolite that most inhibits the activity of beta-glucuronidase, thereby increasing the excretion of toxic compounds and decreasing the activity of harmful substances that are most active in their unbound state.* Inhibition of beta-glucuronidase by Calcium D-Glucarate metabolites ultimately results in potentially decreasing the risk of toxicity.*

In addition, by reducing the activity of beta-glucuronidase and the viability of harmful intestinal bacteria, the salts of D-glucaric acid have been shown to enhance enterohepatic circulation and reduce cholesterol synthesis, thus resulting in maintenance of healthy cholesterol levels.*

Save 10% off Pro Bono and Osteoprev with code FEB10 for the month of February! Dismiss